Gangtok is the capital city of Sikkim which is located in the Himalayan range. Gangtok is also the largest city and municipality in the state. Sikkim is the 1st state to ban polythene and become litter free. Gangtok is the least populated capital town in India. Gangtok grew to renown as a Buddhist Pilgrimage centre by the establishment of Enchey Monastery in 1840.

Gangtok name refers to hill cut. Even after the Independence Sikkim remained to choose to stay as an independent monastery, with Gangtok as it’s capital. Only after 1975 Sikkim is integrated into Indian Union as the 22nd state with Gangtok as capital. Much of its history is not known, the only available are dating back to 1716 after the construction of hermitic Gangtok monastery. Gangtok is an attractive tourist destination, offering scenic beauties of tall mountains and showcasing the rich cultural heritage of it. It’s a blend of modernity and ancient tradition, reflecting the serene nature and friendly environment along with many tourist attractions. Here we are mentioning the top 10 places one must visit on their trip to Gangtok, Sikkim. 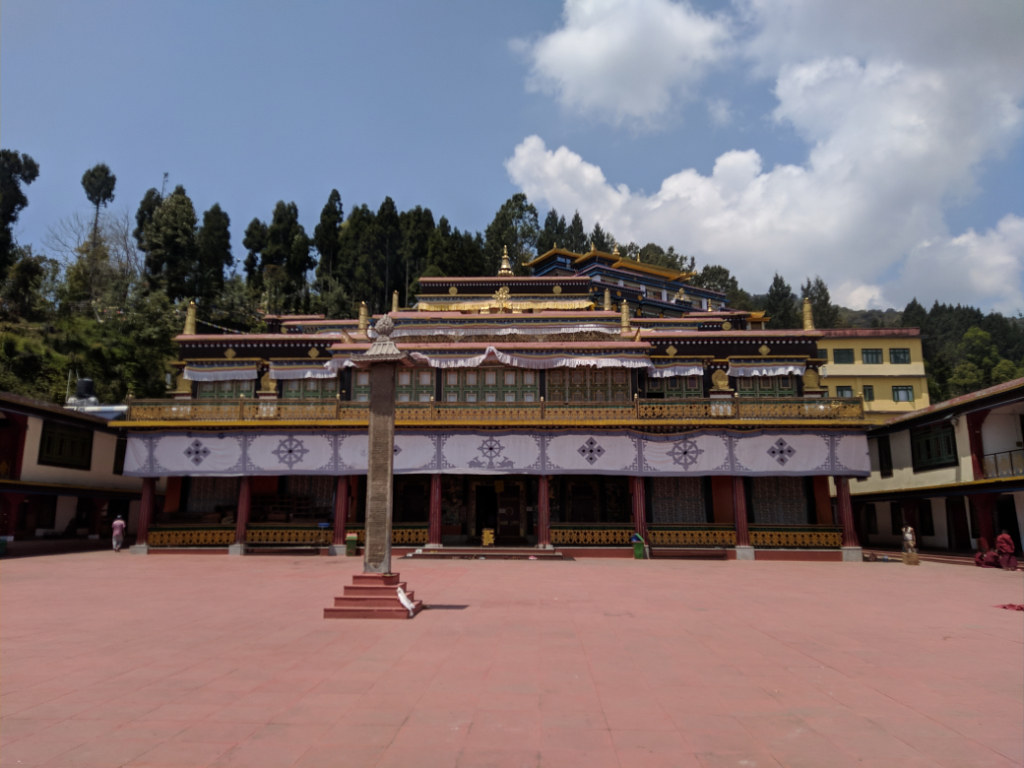 It is also known as Dharmachakra centre. It is a gompa built under the direction of Changchup Darje 12th Karmapa Lama in the mid-1700s. It is located 23 kilometres from Gangtok and mostly resembles the Tibetan Architecture of the original one Tsurphu, Tibet. It belongs to the Kagyu sect of Buddhists which originated in 12 the century. The monastery is located on the opposite hill of Gangtok, soon reaching Rumtek one can see the magical view of Gangtok city from the other side of the mountain. It is a beautiful three-storeyed building containing the Buddhist religious artwork and is a renowned centre of Kagyu teachings. 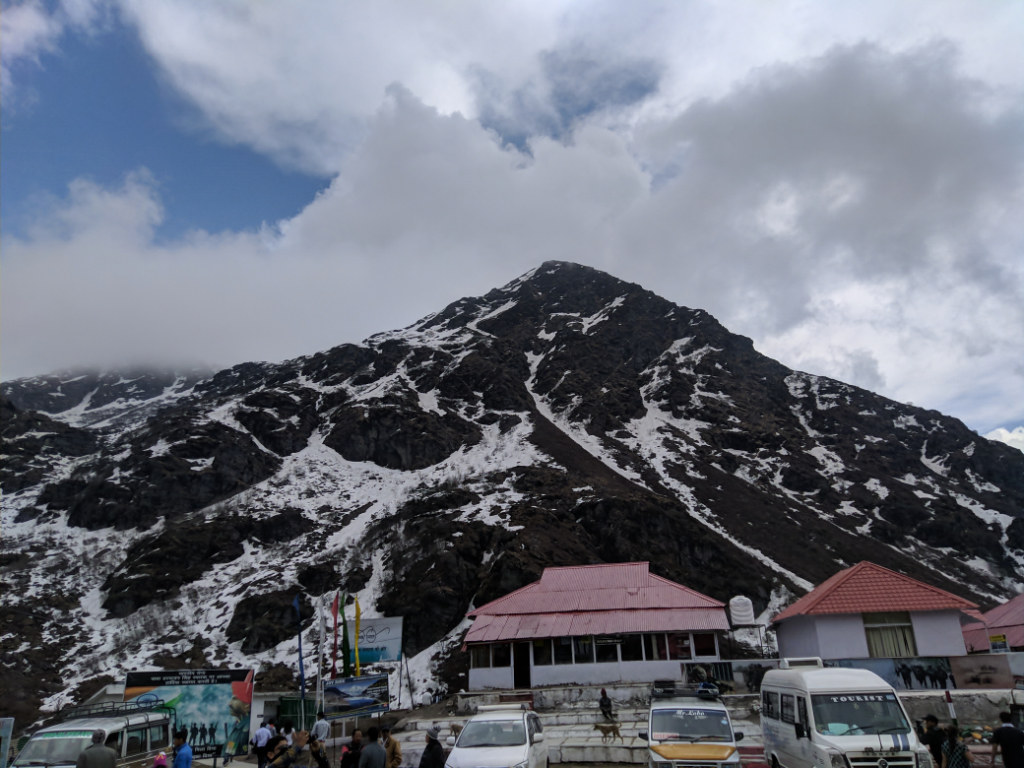 Nathu La ( Nathula – listening ears, La – pass ) is the mountain pass that connects Indian Union with China’s Tibet autonomous region. It is allowed only for Indians to visit only after getting the required permission from the authorities of Gangtok. The pass is located at 4,310mts ( 14,410ft ) above mean sea level. It’s the part of the ancient silk road and situated on 54 kilometres east of Gangtok. During winters the pass is blocked as a result of heavy snowfall. Due to its steep slopes and the gravelly loamy surface, it’s prone to landslides. Besides that, it’s subtropical forest environment and Alpine vegetation lefts you in awe with nature’s beauty. 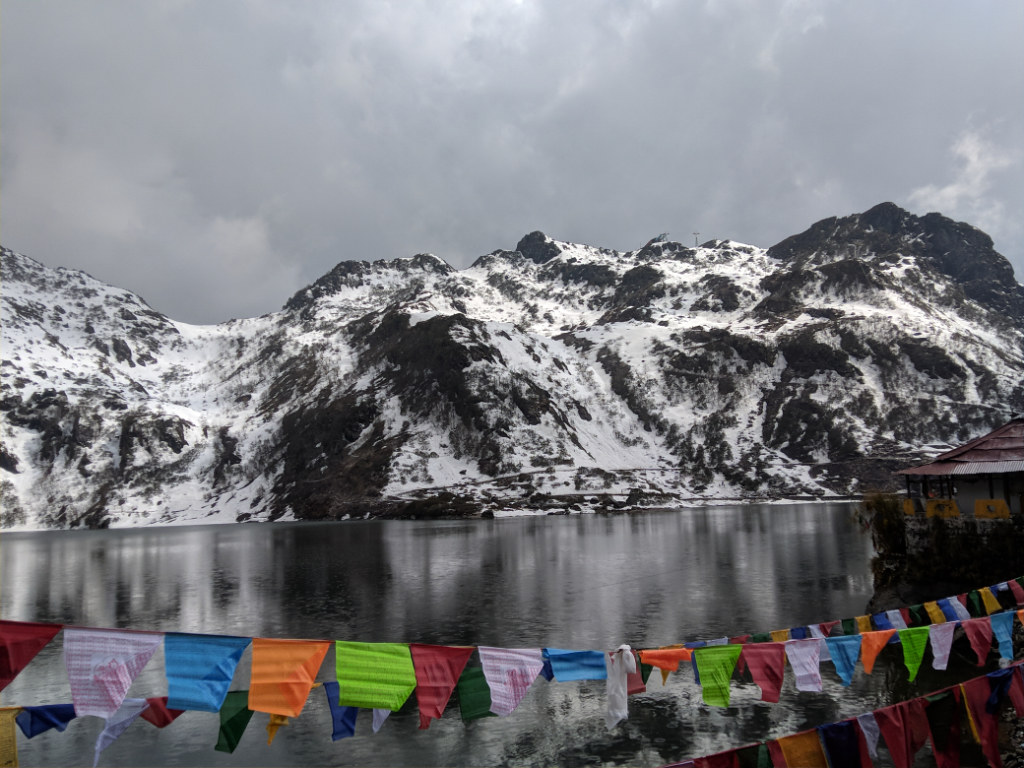 Tsomgo in Bhutia language refers to Tso – Lake, Mgo – head. The lake is located at an elevation of 3,754m ( 12,400ft).The lake remains frozen during winters. The lake reflects different colours with changing seasons, which is considered to be very promising by the local Sikkimese people. High steep snow-covered mountains surround the lake. During summer these snow melts and water enters into the lake. Tsomgo lake is situated 38 kilometres from Gangtok. This landlocked lake surrounded by mountains gives a deep high within you and uplift your soul. Cool and cosy weather of the lake when visited with your dear ones gives you a sense of warmth. 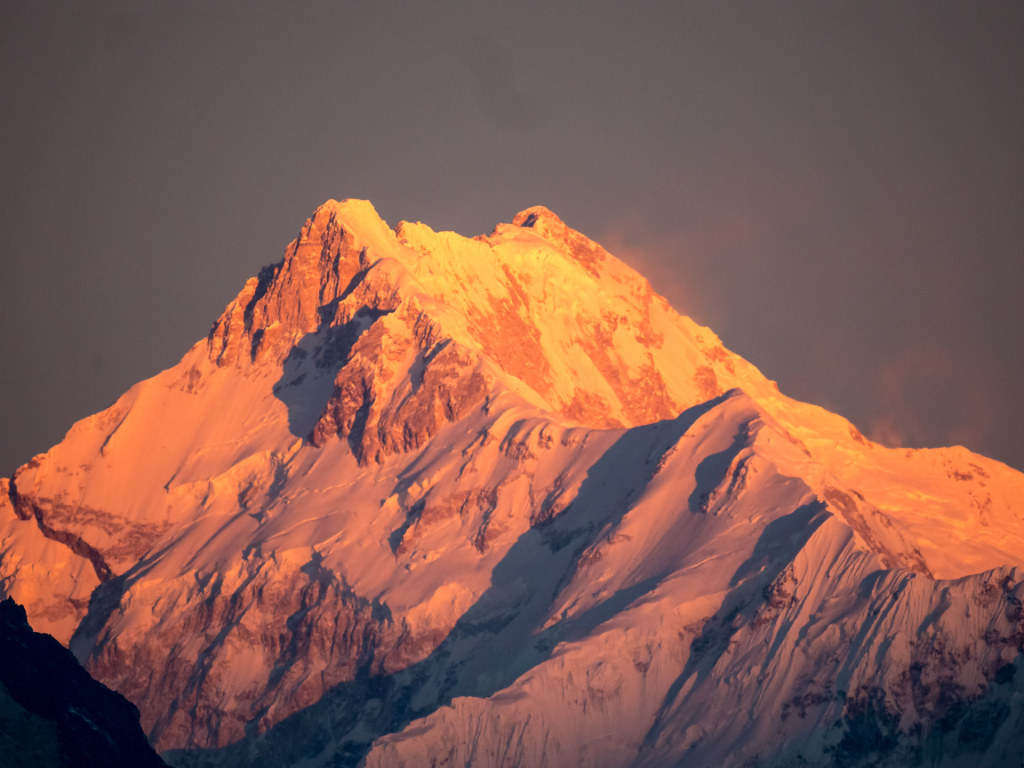 As it is evident that Sikkim itself is in the Himalayan range, so definitely it should contain peaks with higher altitudes. Kangchenjunga the 3rd highest mountain in the world with an elevation of 8,586 mts ( 28,169ft ) that partly lies in Sikkim and partly in Nepal. The Kangchenjunga landscape is a complex of three distinct ecoregions they are eastern Himalayan broad-leaved and coniferous forests, the Eastern Himalayan alpine shrub and meadows and the Terai-Duar savanna and grasslands. Kangchenjunga peak is the highest peak in India.

It is one of the UNESCO’S World heritage sites located in Sikkim and named after the Kangchenjunga peak. It is a home for many glaciers Zemu glacier and accounts a wide variety of Flora and Fauna such as Musk deer, Snow Leopard, Clouded Leopard and Himalayan Tahr are examples. Few tribal settlements such as Lepcha are inside the park. Trekking here starts from Yuksom. Trekking lovers will love this place as it provides many routes to go for. 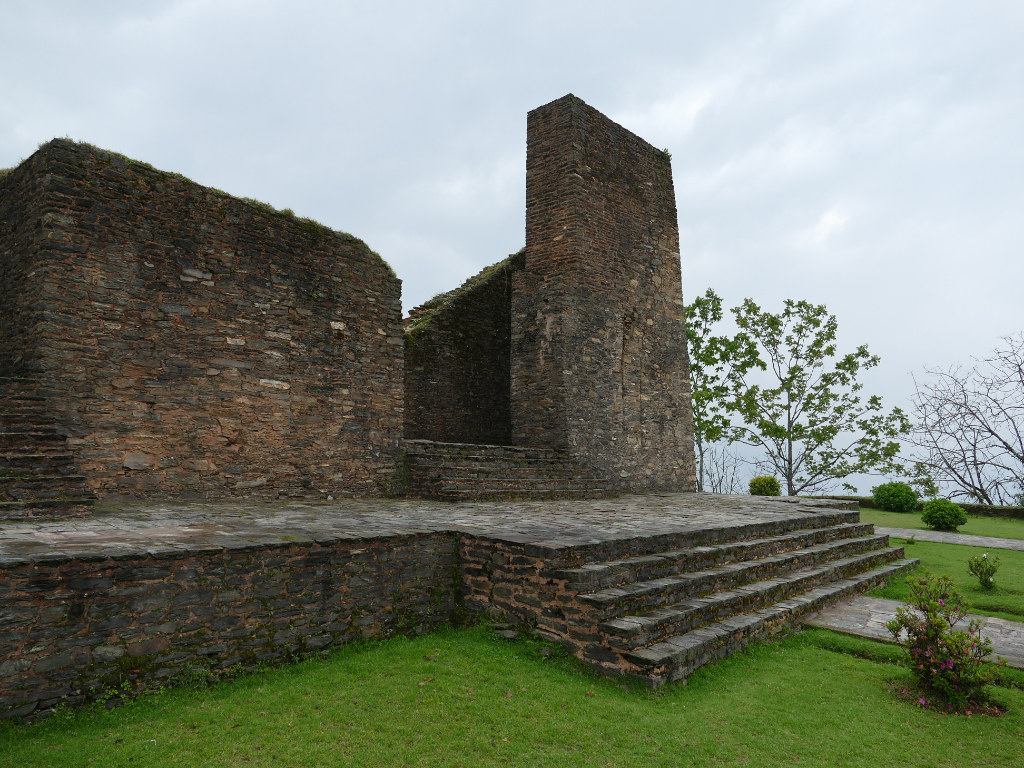 Rabdentse served as the second capital of the former kingdom of Sikkim from 1670 to 1814. The city was destroyed by the invasions of the Gurkha army, and only now the ruins of the palace and the chortens can be seen now. Pemayangtse Monastery is one of the oldest monasteries which is located close to the ruins. From this point on can have a beautiful view of Kangchenjunga peak. This site has been declared as of national importance by Archeological survey of India. It is located close to Pelling. 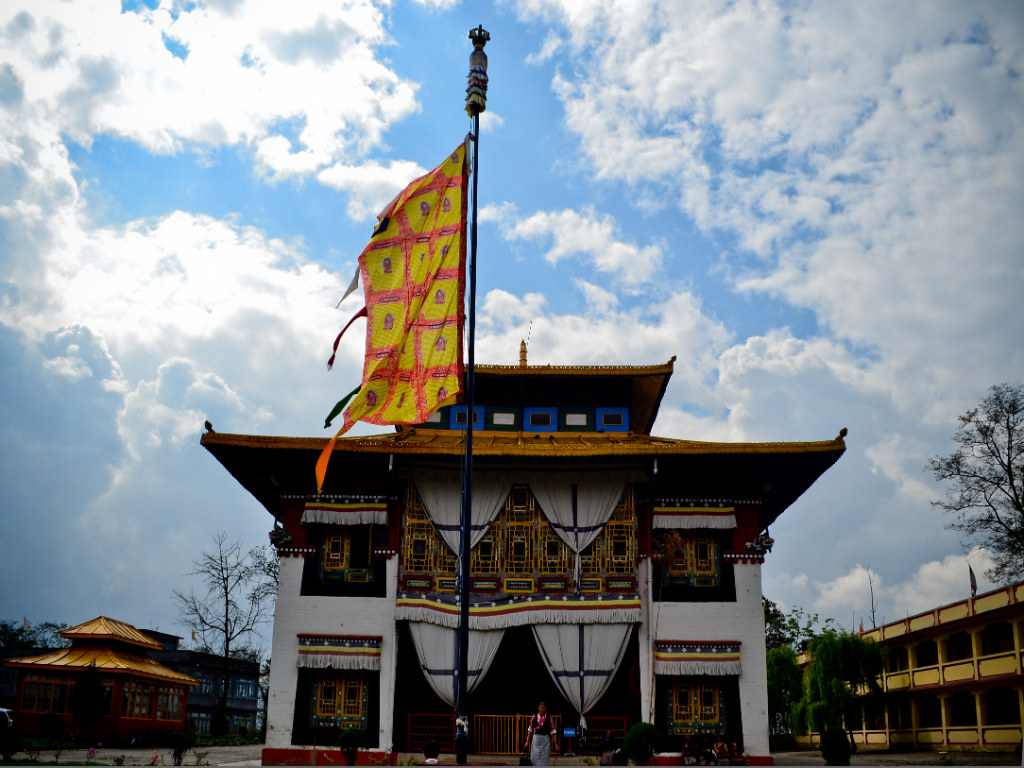 Pemayangtse Monastery is a Buddhist monastery which is very ancient in pemayangtse situated near Pelling, Sikkim. Built by Lama Lhatsun Chenpo in 1705 as a small Lhakhang later it was renovated mostly during the reign of third Chogyal Chakdor Namgyal. This monastery follows the Nyingma Order of Tibetan Buddhism and controls all other monasteries in the Sikkim according to that order. The word pemayangtse means “perfect sublime lotus”. From here, one witnesses the clear skies in spring summer and unveiling the ravishing beauty of the Himalayan ranges. 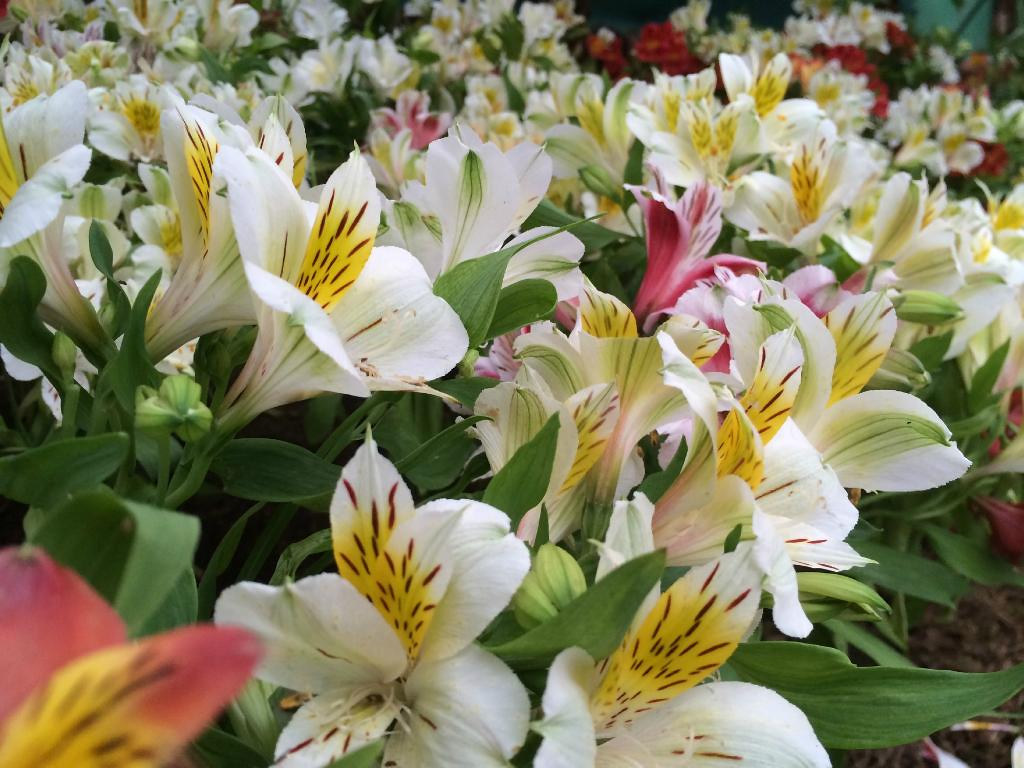 Deorali Orchid Sanctuary is located near to the Namgyal Institute, Gangtok in Sikkim. There are a total of 454 variety species of Orchids out of which 200 species are found in this sanctuary. Orchids in this sanctuary vary from season to season. Visiting this sanctuary during the blooming seasons extending from April to May, July to August and October to November. Besides orchids, it also grows over 40 genera of Rhododendron. Preserving Not only the orchids but also it forms an ecological hotspot that aims at conservation and further propagation of these species. 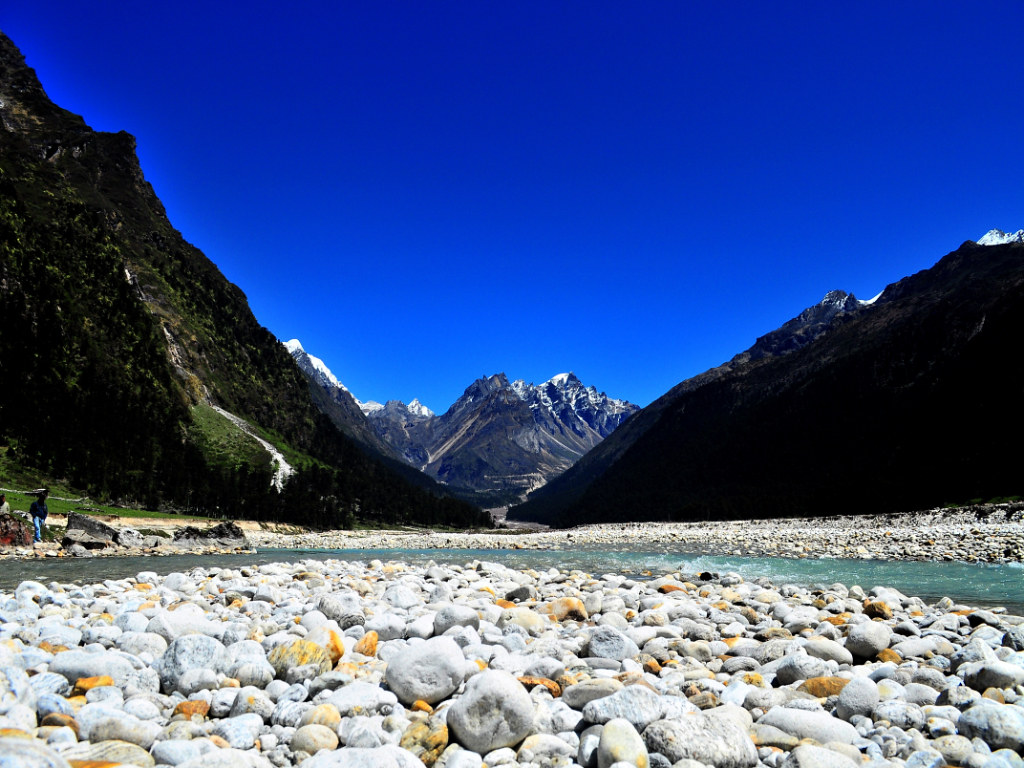 Yumthang valley is the flower sanctuary consisting of hot springs, lakes rivers yaks and grazing pasture. It is located at a distance of 150 km from the city of Gangtok. Popularly known as the valley of flowers hosts a variety of flower species and the state flower of Sikkim Rhododendron. The nearest town near to this valley is Lachung, and the valley is closed between December and March due to heavy snowfall. Tourists can enjoy skiing in the valley. 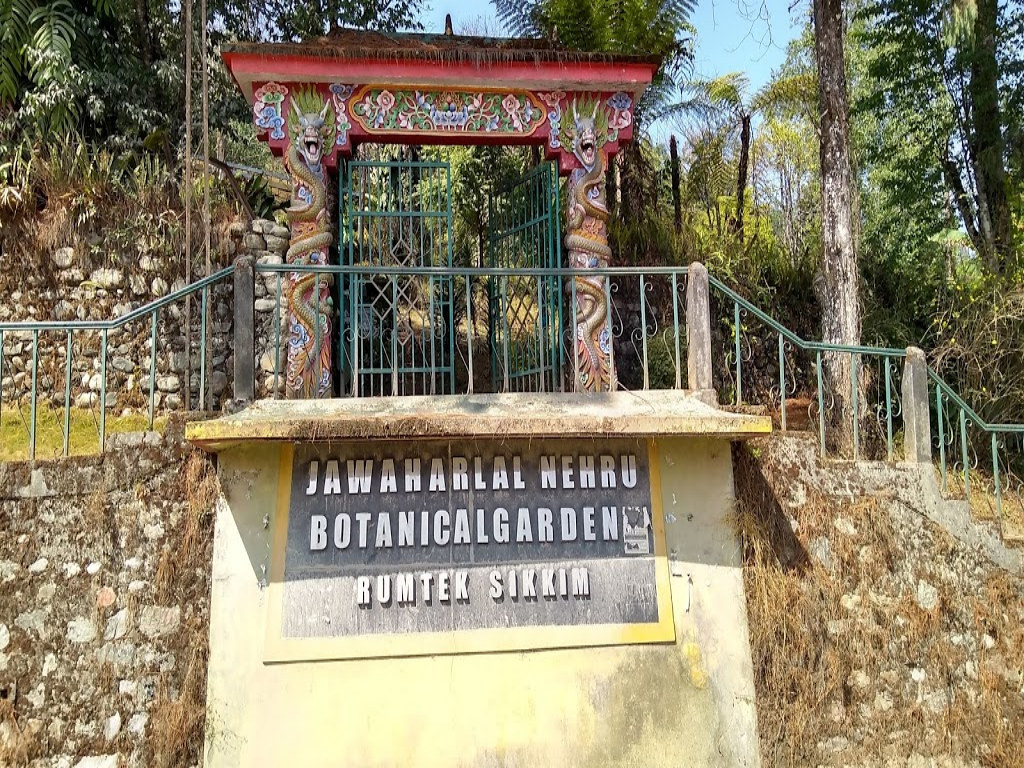 It is located near Rumtek Monastery named after the 1st prime minister of India Jawaharlal Nehru and is also institute for research is home for many species of Orchids and more than 50 species of trees especially oaks. You will be mesmerised by the lush greenery, colourful flowers and is maintained by the forest department of the government of Sikkim. Visiting these gardens during the flowering season of March to late May and October to mid-December is the best experience one can get through. 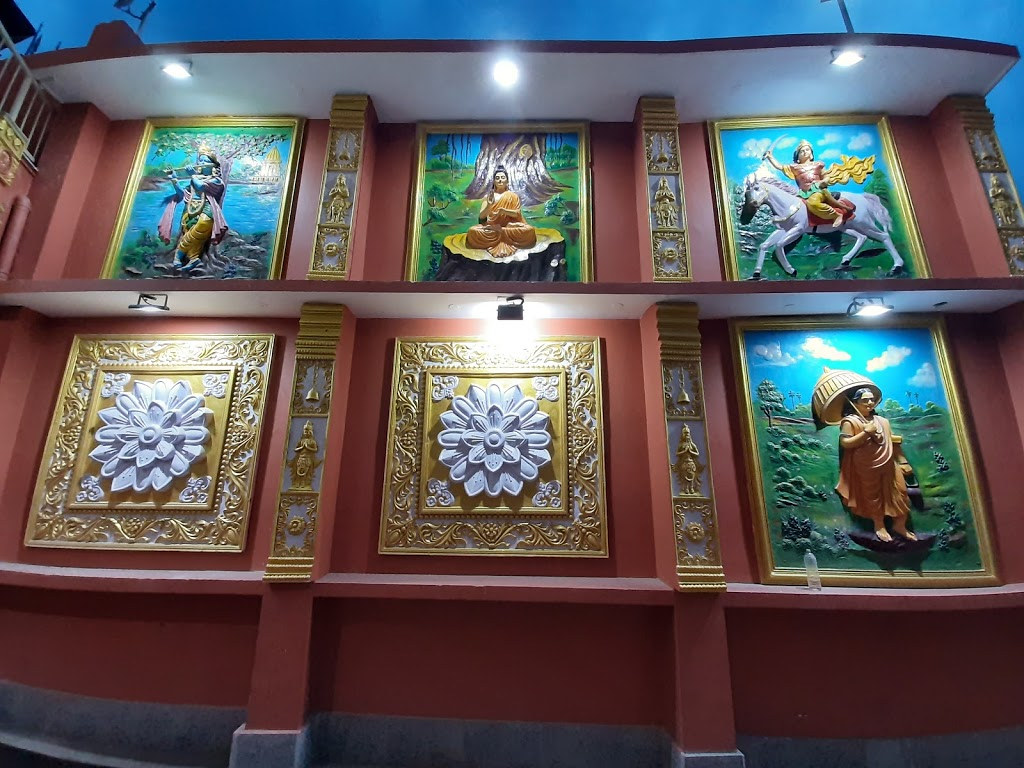 It is a Hindu temple located in the city of Gangtok. It is one of the oldest temples located in Sikkim. It covers almost all the deities and is a major pilgrimage centre for Hindus. A four day long Chatth Puja is organised by Thakubari Temple by the Chatth Puja organising committee Gangtok, Sikkim. It is performed to show gratitude of humans towards god for sustaining life on Earth and to fulfilling the wishes where the sun is the main deity who believes for granting prosperity and well being.

The trip to Gangtok, Sikkim is a spiritual, holistic and recreational one where one can find themselves in altogether in a different perspective. Gives you memories that’ll be cherished for a long time. Visiting it in a spring-summer provides you with the best experience on the whole.